2011 was quite a year for Chrysler. Thanks in part to its "Imported from Detroit" campaign, award-winning Chrysler 300, and more, the automaker started to revive itself and infuse some much-needed hometown-pride back into the Motor City.

As this year is coming to a close, we wanted to compile a short-list of our favorite auto stories from 2011. The articles range from the new Call of Duty Jeep, which was a big hit with our readers and Facebook fans alike, to a look at Chrysler's popular "Imported from Detroit" campaign that spurred renewed interest in the brand and acted as a catalyst for reigniting a sense of hope and appreciation for Detroit.

We hope you enjoy our selection! Tell us your favorite part of 2011 in the comment section.

Chrysler and Eminem are teaming up once again to not only incite passion for Detroit, but actually raise money for local Detroit charities in order to have a positive impact in the Motor City community.

Detroit, poised to be the new comeback kid of American cities, goes by many names: Motown, Motor City, Hockeytown. And now, the city that represents the heart-and-soul of the American Auto Industry is embarking on a new era of civic pride and positive public relations, mostly thanks to the Chrysler brand.

Chrysler’s “Imported From Detroit” campaign was pushed into national consciousness with its Eminem-embellished Super Bowl commercial and has maintained momentum with a series of YouTube videos featuring local heros that represent the dedication and spirit of the city. Read more...

More on Chrysler from GRAutoBlog.com

Gamers, step away from your controllers: Jeep and Activision are joining forces once more for a second Call of Duty Jeep.

In 2011, the Call of Duty franchise teamed up with Jeep for a game-inspired Black Ops Wrangler. Now Jeep has a new special edition just in time for the release of the much-anticipated Modern Warfare 3. Read more...

Jeep has yet to provide us with a pickup version since the Comanche truck that ended its solo reign in 1992. However, thanks to the conversion-geniuses over at Chrysler and Mopar, the dry spell is finally over!

The JK-8 Jeep Wrangler Pickup conversion kit by Mopar is the perfect combination of a Jeep’s classicly rugged style with the extra advantage of a truck’s practical versatility. The JK-8 kit transforms any 2007-2011 Jeep Wrangler Unlimited into a pickup with a 50 by 44 inch pickup bed. The conversion kit’s suggested retail price stands at $5,499, a decent price to pay for a unique Jeep-truck hybrid. Read more...

More on Jeep from GRAutoBlog.com

The stunning Stinger Yellow paired with Pitch Black paint-job is not a subtle statement, so if you’re looking for a car that will blend in at a Grand Rapids stop-light: These are not the cars for you. Read more ...

Here are two great things we here at GRAutoBlog can get behind: supporting our troops and listening to great music. You can do both thanks to Dodge Ram’s “Letters for Lyrics” program.


More on Dodge from GRAutoBlog.com

Want to be the ultimate Detroit Red Wings fan on your block? Having the new Red Wings Edition Ram 1500 Express in your driveway might help!

Ram known for its "Guts. Glory. Ram." tagline, was a perfect fit for a team who can bring a new meaning to "HEMI-Powered Hockey!" Now Ram is amping up their partnership with the Detroit Red Wings by releasing a limited edition Ram Express 1500 model. Read more ...

Think off-roading is just for the Jeep crowd? Think again. Mopar has introduced a Ram Runner kit that can turn your truck into a full-throttle off-roading machine!

Say goodbye to the road and hello to the sand dunes with this land-hungry conversion that was designed in part by Baja off-road racer Kent Kroeker. Read more...

More on Ram from GRAutoBlog.com

We hope you enjoyed our favorites for 2011, and we look forward to a new year of sharing interesting insights into the automotive world with you!

Check out this year's highlights for our Betten Imports brands: Best of 2011 from GRAutoBlog: Volkswagen, Volvo, Mercedes-Benz Edition.
Posted by Mark DeGroot at 8:37 AM 2 comments:

Change is a constant in the auto industry, but this year in particular ushered in some truly transformative moments for three of our favorite brands: Volkswagen, Volvo and Mercedes-Benz.

In 2011 we saw the re-invention of the iconic VW Beetle, Volvo's new design direction, and Mercedes-Benz forged a new path with fully re-designed models of the C-Class Coupe, M-Class model and more.

2011 has also been a year of big redesigns for the Mercedes-Benz SLK and both the Volkswagen Passat and the iconic VW Beetle, all of which are included in this '10 Best Redesigns for 2012' list.

Along with its stunning redesigns, Volkswagen really flexed its concept-design muscles. This year's offerings ranged from the re-invention of the iconic T1 Camper Van with the Volkswagen Bulli Bus concept, (featured below) to the Volkswagen NILS concept, a futuristic single-passenger pod car that represents an emerging shift in eco-friendly design for the auto industry.

Volvo took its brand in a new direction with its 'Designed Around You' strategy, which resulted in the development of the Volvo Concept Universe, and the Concept You. Volvo was also back in the spotlight with its Twilight vampire vehicle of choice, the  Volvo S60 T6 R-design that was featured in The Twilight Saga: Breaking Dawn Part 1.

Mercedes-Benz introduced its new M-Class and C-Class Coupe, as well as, a modern re-interpretation of the classic Unimog model with a new award-winning concept. Mercedes-Benz didn't stop there: They wowed the automotive world with the beautifully-designed and technologically-innovative A-Class concept.

Here are some of our favorite posts from 2011:

The iconic Volkswagen Microbus design has received an automotive-design facelift, and then some. “Car of the future” may be an overused car-cliche, but this VW concept may truly be just that.

Unveiled at the Geneva Auto Show, the ‘Bulli Bus’ is a concept that Volkswagen-devotees are hoping will actually come into fruition. If Volkswagen sees this model through to production, the VW van will be popular with both the environmentally-conscious and techie crowds thanks to its electric-engine and tablet-friendly capabilities. Read more...

Say hello to the latest edition to the Volkswagen family: the Up! compact car. The Up! may be just 139.4 inches long and 64.6 inches wide, but VW calls it “a giant among small cars.”

Up!, the next ‘big thing’ in the small-car sector, comes in a trio of three-cylinder engines: two gasoline-powered and one natural-gas powered engine. There will be the option of a 59 horsepower gas engine that receives 56 mpg, and a 74 horsepower engine with 55 mpg. The natural gas-powered engine, with a later release date, will boast 67 horsepower with a truly impressive 73 mpg. Read more...

Unveiled at the Frankfurt Auto Show, Volvo’s Concept You is a luxury sedan with the perfect blend of traditional luxury and contemporary touchscreen technology.

The You, a model that has evolved from Volvo’s Concept Universe, may represent the future of the car company’s larger sedan models. Read more... 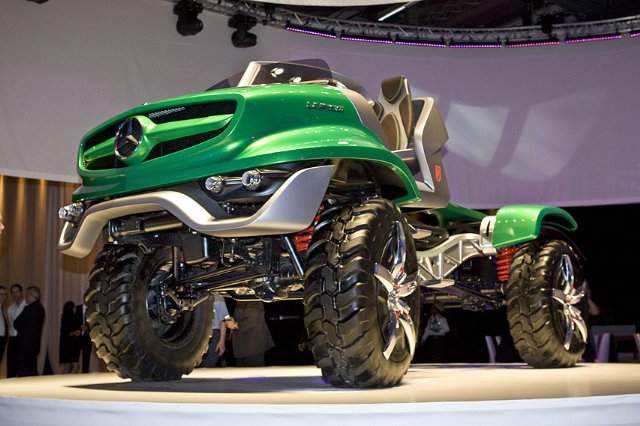 Leave it up to Mercedes-Benz to re-visit a vehicle that was originally intended for agriculture and design a completely avant-garde, and dare we say it, beautiful vehicle that maintains its trademark level of all-purpose functionality. Mercedes-Benz says the concept, simply dubbed “60 Years of Unimog,” will set the future tone of the automaker’s design and development of commercial vehicles.

The concept was the combined brainchild of the Mercedes-Benz Special Trucks Unit (MBS) and an outside design team. The concept takes elements from the modern Unimog U 5000 chassis while maintaining style solidarity with the original Unimog. Read more...

The new Mercedes-Benz C-Class Coupe is a sophisticated statement on four wheels. The 2012 Coupe model has an aggressive design with a performance engine and seven-speed transmission to back it up.

Based on the C-Class Sedan, the new Coupe stays true to Mercedes-Benz’s bold profile with its signature slatted grill and sleek yet sporty silhouette. Read more...

Thank you for travelling on this journey with us, we look forward to an even more exciting 2012!

Winter may be upon us, but that doesn't mean that you'll be left out in the cold. Courtesy Chrysler Jeep Dodge and Ram have got you covered with a great deal on on Ram 1500s.

Courtesy Chrysler Jeep Dodge Ram has chosen the Ram 1500 as the "Car of the Month" for December. The Ram 1500 has everything you need to see you through another West Michigan winter, not to mention a shiver-inducing incentive of up to $5,000 in rebates.*

Read about the Laramie and Outdoorsman edition Ram 1500s.

Get all the details on the Red Wings Limited Edition Ram 1500 Express.

Visit Mopar.com to check out all the available additions that will make your Ram 1500 truly stand out: Ram accessories.

To browse Courtesy's extensive Ram inventory, and to check out our other dealership incentives on new and pre-owned Chrysler, Dodge, Jeep and Ram vehicles, visit www.courtesy.com.

To find out how you can win free gas, check out our Facebook page.