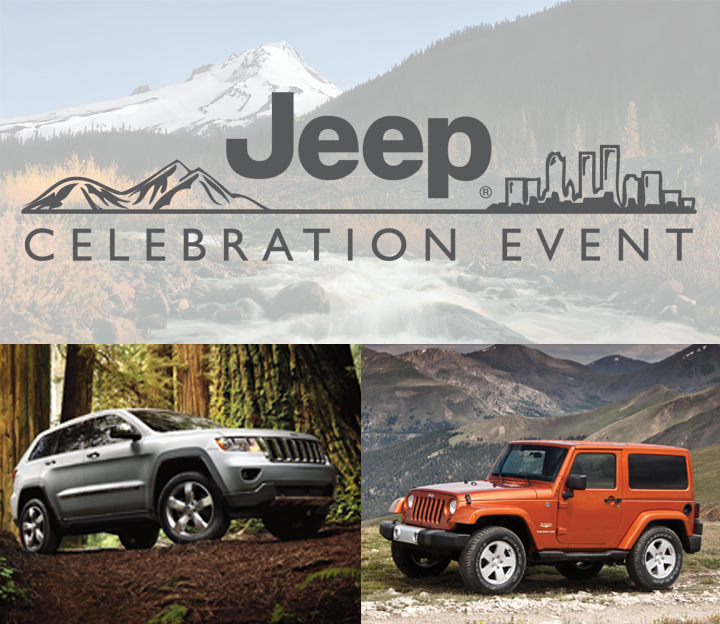 Courtesy Chrysler Jeep Dodge is giving you one more reason to get behind the wheel of a brand new Jeep! For the month of September, the 2011 Jeep Celebration Event gives you $500 in bonus cash in addition to all the current purchasing incentives!

Check out our extensive Jeep selection at Courtesy Chrysler Jeep Dodge in Grand Rapids, Michigan.
You can also find and interact with Courtesy at:
http://www.facebook.com/courtesycjd
http://www.twitter.com/courtesygr
http://www.grautoblog.com
http://www.youtube.com/user/CourtesyCJD

The Beetle's back and it's at Betten Imports! The icon has been reinvented, this time for the 21st Century, with a new sporty look - a truly modern twist on the classic model.

The third revival of the classic 'people's car' has been given a masculine, driver-centric design that will be sure to invigorate Volkswagen die-hards, as well as, encourage an entire new generation of 'VW-heads.'

The all-new Beetle is a combination of the original's classic styling and a sleeker, more dynamic body style, not to mention it's six inches longer and 3.3 inches wider than its most recent predecessor.

Later in 2012, Volkswagen will release a TDI Clean Diesel model, which will be the most fuel-efficient Beetle ever, with a highway estimate of 40 mpg.

To schedule your Beetle test drive, or to learn more about our future in-store models, give us a call at (616) 301-2100 or be part of the conversation with us on Facebook.

Read more about the 2012 Volkswagen Beetle.

Unveiled at the Frankfurt Auto Show, Volvo's Concept You is a luxury sedan with the perfect blend of traditional luxury and contemporary touchscreen technology.

The You, a model that has evolved from Volvo's Concept Universe, may represent the future of the car company's larger sedan models.

The You was clearly given that name for a reason: Its driver-centric design includes multiple touch pads that allow you and your passengers to access and adjust a wide range of infotainment options.

The concept's intuitive touch-based technology utilizes a half-dozen touch pads that can be brought to attention at a touch or even simply a gaze in the right direction. This is made possible through hidden infared cameras that register the driver's eye and hand movements triggering the touchscreen controls. With the help of in-car file transfer systems, infotainment data can also be "flipped" between the front and rear consoles.

The touchscreen aspect of the You makes for a 'clean interior' that replaces the cluttered chunkiness of knobs and buttons with the smooth surfaces of touchscreens. The interior has truly luxurious details, such as wood floors, handcrafted pieces of walnut, leather panels, Dianmica suede roof lining and more. Exterior details on the grille and headlights were inspired by the iconic Danish design house by Georg Jensen.

The You also has a unique color theme that blends gradually from dark to light, in both the seating and the floor covering. The hand-tufted carpet designed by Swedish brand Kasthall, also has a texture that transitions from firm in the front to soft at the back of the vehicle.

Posted by Mark DeGroot at 8:16 AM No comments:

Gamers, step away from your controllers: Jeep and Activision are joining forces once more for a second Call of Duty Jeep.

In 2011, the Call of Duty franchise teamed up with Jeep for a game-inspired Black Ops Wrangler. Now Jeep has a new special edition just in time for the release of the much-anticipated Modern Warfare 3.

Although the real world you'll be driving your Jeep through will be hopefully much less 'exciting' than the hazardous war zone of the game, the Wrangler is loaded with some impressive off-road features. It's equipped with 32-inch tires, a power hood dome and new special edition features including live axles, a two-speed transfer case and locking differentials for both the front and rear.

What makes the special edition truly stand out are its Call of Duty graphics on the spare tire cover, front fenders, embroidered seats, and our personal favorite: a special, serialized dashboard-plaque, (watch the video below for a look at the interior.)

The MW3 Wrangler will be released in both black or silver editions, with the option of either two or four-door body styles. Call of Duty: Modern Warfare 3 and the Jeep it inspired will both be released in November.

Hey GRAutoBlog fans,
Fellow reader and big Jeep-enthusiast, Bob Wood is taking the wheel for this guest blog post! I originally connected with Bob after he commented on our "Jeep's 70th Anniversary Revs up Chrysler Museum" article. He mentioned that he had been the lucky owner of the last CJ5 Jeep to be produced in Ohio and had donated it to the Walter P. Chrysler Museum. He provided me with several photographs of the iconic Jeep, along with his Jeep story. Read about it in the article "Classic Jeep's Last Stand: 83 CJ5 Guest Blog by Bob Wood."

Now that Bob has taken his trip to the Chrysler museum to celebrate Jeep's 70th Anniversary, he has a new story to tell. Below are some of his museum photos and his explanation of the visit. The story is in his own words.

Thanks Bob for once again sharing your story!

Editor's Note: If you want to share your car's story with us for a chance to be on GRAutoBlog, feel free to email me at ahartig@bettenimports.com. Thank you!

I packed up the Jeep and left for Montgomery, Alabama (475 miles,) on July 10th, to spend the night and next day with my daughter and her family. Was hoping to pick up my grandson, 14, to take him to the museum for the 70th Anniversary of Jeep and to see our 83 CJ5, in which he has spent quite a bit of time with me. That didn't work since he had been to a church camp and had other obligations. On Tuesday, July 12 I left Montgomery for Findlay, Ohio, via I65 to Louisville and I71, to I75 just south of Cincinnati then on to Findlay. Findlay is on I75 45 miles south of Toledo. My sister-in-law and her husband (Bill) have lived in Findlay for years. I intended to use Findlay as a base since Auburn Hills, and the Museum, is only 120 miles on a direct route up I75. Easy drive. My brother-in-law was interested in going to the celebration since he has taken many trips with me in the 83 CJ5.

On July 13, Bill and I left early for the museum, right up I75 to Auburn Hills, just north of Pontiac, and arrived around 9:39 a.m. My museum contact, Brandt Rosenbusch, had made arrangements for our admission. The volunteers and security personnel greeted us with friendly comments about the our Jeep and directed us to its location in the museum.

The Walter P Chrysler Museum is one of the finest auto museums I have ever seen. A new, attractive and well-designed building. Upon entering the museum, a spacious main area with a two-story center display area greets you. There is a cantilevered center attraction with four featured cars from Chrysler displayed on each cantilever. Very impressive. There were several Jeep prototypes on the display floor and placards describing Jeep milestones. A volunteer steered us to the elevator, on the main floor, to the lower level, called the "Bosses Workshop," where the Jeep display is located. The elevator is interesting since it is large enough to permit cars into and out of the museum; if you go to the museum make sure you take a ride.

At this month's Frankfurt Auto Show, Volkswagen will be revealing an automotive game-changer modeled after the idea of "minimalist mobility."

Volkswagen's latest concept offering, the NILS, is an electric-powered pod car with an urban-centric twist: It was designed for only one occupant.

With the help of urban-commuting data collected from Germany's Federal Ministry of Transport, the pod car's combination of electric-power and small size could make it the true city-car of the future and the ultimate in commuter travel.

The 1,014-lb NILS has an impressive driving range of 40 miles from a single two-hour charge of its 5.3 kWh lithium-ion battery. Its top speed stands at 80 mph, gaining 0-60 mph in about 11 seconds.

While the NILS may be of a small stature, Volkswagen has made sure it has a significant amount of advanced safety features, including laser-controlled cruise control, hazard avoidance systems and a full safety cell. Volkswagen has also packed on some unique features onto its futuristic concept, such as gullwing doors and free-standing wheels.